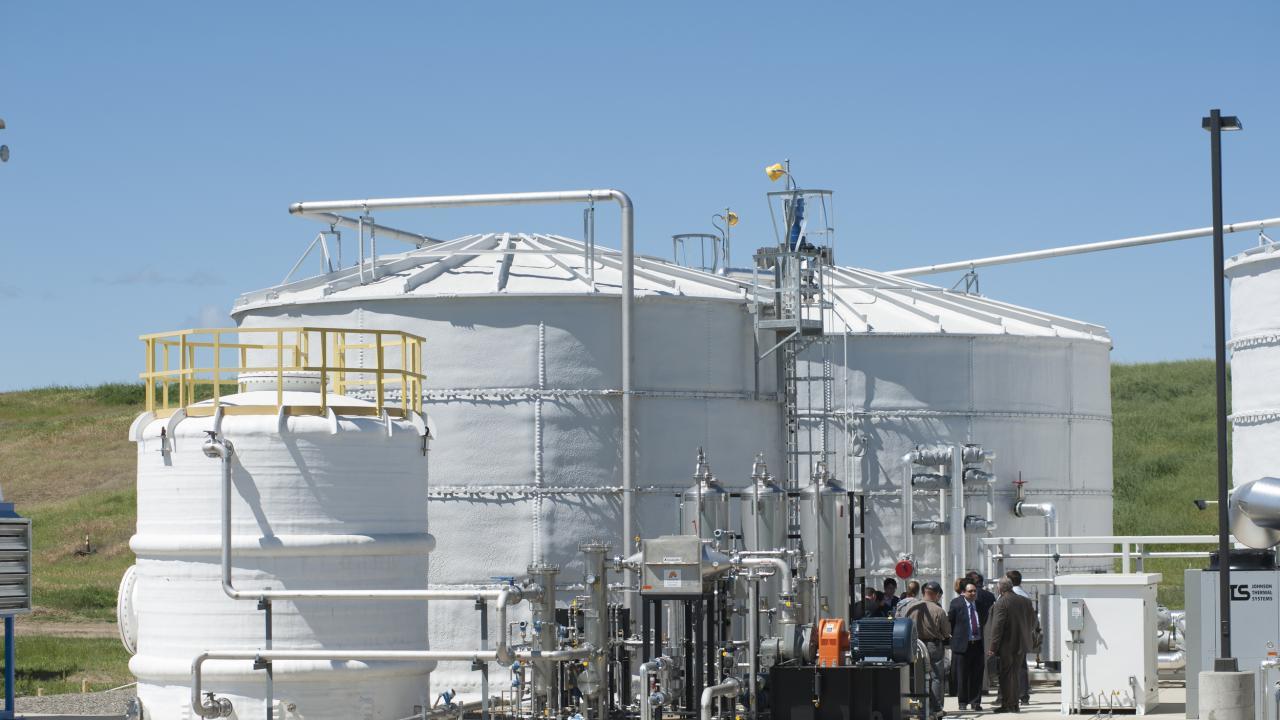 After UC Davis took over the Renewable Energy Anaerobic Digester (READ) Biodigester facility in 2017, staff ramped up efforts to increase usage of the facility. They started by investigating removing ammonia from the digestate (the material remaining after the anaerobic digestion of a biodegradable) and what the result would be. This change will enable the READ facility to increase revenue and decrease waste. Rather than paying to dispose of the digestate, the facility could use it to make beneficial fertilizer products that can be sold.

UC Davis Utilities staff collaborated with researchers in the Civil and Environmental Engineering department and a third-party company, Advanced Environmental Methods (AEM). AEM had experience with waste stream de-ammonification and developed a novel distillation column to remove ammonia from digestate. We spoke with Joe Yonkoski, an Associate Engineer with Facilities Management Utilities Data & Engineering, about the ins and outs of this project. Yonkoski helped pilot and review design of AEM’s distillation equipment and designed the additional equipment systems that support the distillation.

First, a conceptual process design and an economic evaluation were completed by Utilities engineering staff, centered on the ammonia distillation equipment supplied by AEM. It was found that the system would pay for itself in 3-5 years through avoided costs and increased revenues. Next, Utilities sought multiple rounds of campus approvals. Yonkoski worked with AEM, Nasim Mohammadi (Utilities Electrical Engineer), and Michael Lindquist (Utilities Project Management Supervisor and Civil Engineer) to complete a detailed design of the system while Lindquist and Janice Stires (Utilities Project Manager) also developed a project schedule and budget. The team also worked with Safety Services and a private consultant to do an extensive safety assessment required for the new process. Currently, all equipment has been procured and construction is expected to commence following final design document approval by campus stakeholders. The final result will reflect an impressive amount of technical design work and innovation done by the internal team.

The application of ammonia distillation technology on an anaerobic digester effluent stream is truly the first of its kind. Though the system has not yet been constructed, the team has already overcome many technical challenges to design it. For example, the fertilizer product produced is more valuable and easier to sell if it is certified as an organic fertilizer. Currently, there is only one other organic ammonium fertilizer on the market. Designing the process such that organic fertilizer could be produced, as well as proving to regulators that it is organic were challenges. The process also consumes a chemical and produces a product that crystallizes at room temperature. Engineers had to design storage tanks, piping, and other equipment carrying these chemicals to stay warm in all conditions.

State regulation requires the diversion of organics, like food waste, from landfills. “Anaerobic digesters” are a more attractive alternative to filling landfills with organic waste. However, there are persistent challenges with the handling of digestate. This project will simplify digestate handling, reduce digestate handling costs, and generate additional revenue for the READ facility. This project improves the financial sustainability of the READ facility and positions UC Davis to be on the leading edge of organic waste disposal technology. It also increases the university’s ties to the community as the facility accepts local food waste and will produce organic fertilizer for local agriculture.