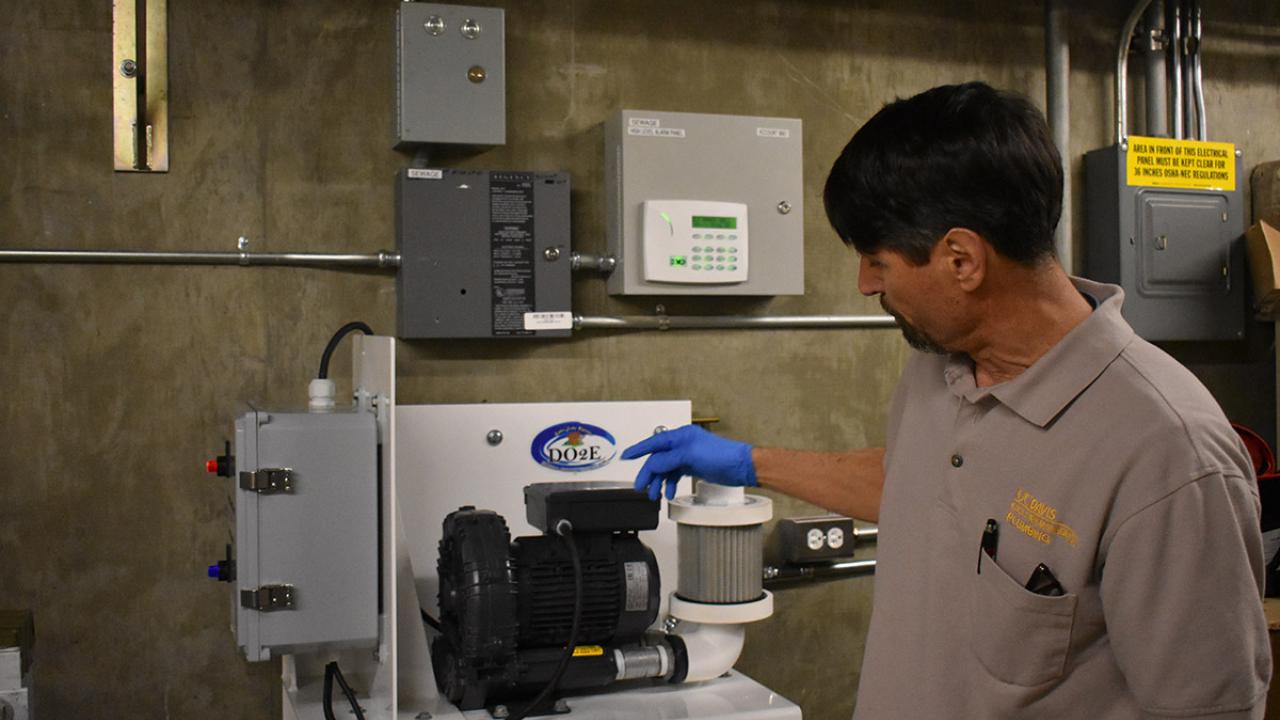 Not many of us think about how basement restroom waste moves through a building waste system but Dan Wright does, and he is creative about keeping these systems in top shape! When Dan approached me and asked if I wanted to see how he is saving Facilities Management money and reducing the use of chemicals, I was skeptical about what I would find and hesitatingly followed him into the bowels (ha!) of Mrak Hall. I am glad I did though because what I earned was amazing and smelled much better than I thought!

After years of trying to mask the smell of lift stations in buildings with bathrooms in basements, it all came to a head when Mrak Hall’s system started having clogging issues due to sanitary wipes being flushed down the toilets which in turn caused problems in the lift system. (See picture) Dan worked with ChemSearch to find a solution. ChemSearch helped Dan connect with the startup company DO2E (delivering oxygen to the environment). DO2E recommended using a small piece of equipment called the “Little John Ozone Digester”. This equipment uses a small motor to introduce oxygen and ozone to the wastewater by blowing air past two small UV bulbs down to a patented fitting below the sewage level.   This process breaks up the waste by churning it, introducing oxygen and UV light, which breaks down any solids to a liquid and allows it to move through the system easier. In doing this, it alleviates clogs, smells and corrosion that is present when the waste sits still.

Within a few hours, the motor churning was able to break up the wipes found in the system in Mrak along with any other solids, reducing the smell and moved the waste through the system! Suman Dhal, MPH from Industrial Hygiene also reviewed the impact on the environment of this system and found that ozone gas at the system post installation of the Little John Ozone Digester, reads between 4-40  parts per billion (ppb), which is below the 40-50 ppm found in the outside environment. Suman goes on to say: “Ozone is a highly reactive gas and readily breaks down in the atmosphere. As illustrated in the data above, even a few feet away from the source, levels of ozone gas are very low and/or undetectable. A person working in the general space would not be exposed to ozone gas. The ozone generator overall seems to be very effective in reducing organic matter build up in the sewage holding tank, and in controlling odors which affect indoor air quality. Kudos to finding a great solution to this issue.”

On top of having no smell, Dan has been able to reduce the need for chemicals in the system which created less pest control problems and reduced both maintenance calls and reducing erosion to the tank itself, plumbing connections and piping. We estimate that, due to normal corrosion in the original system, we would have to recoat the tanks within 10 years. This includes replacing connectors and piping at costs around $29,000 to complete and should be re-accomplished every 10 years.

This DM Project will save Facilities Management about $12,000 annually per building, and with seventeen buildings with basements, we have a potential savings of $207,000 a year! This will also avoid the recoating and connections corrosion problems as mentioned above, saving approximately $29,000 in Deferred Maintenance every 5-10 years. The Little John Ozone Digester system will pay for itself with a reduction in maintenance, service calls, and elimination of chemicals within months. The new estimated routine maintenance cost will be less than $2,000 a year per system.
Mrak and Kemper Hall were completed in the last two years and Dan plans to install this system in five more buildings: King Hall, ARC/Pavillion, Kemper North/West, Social Sciences and Tupper Hall.
Kudos to Dan for looking for a new solution to an old problem!

Lighting the Way for Intramural Sports