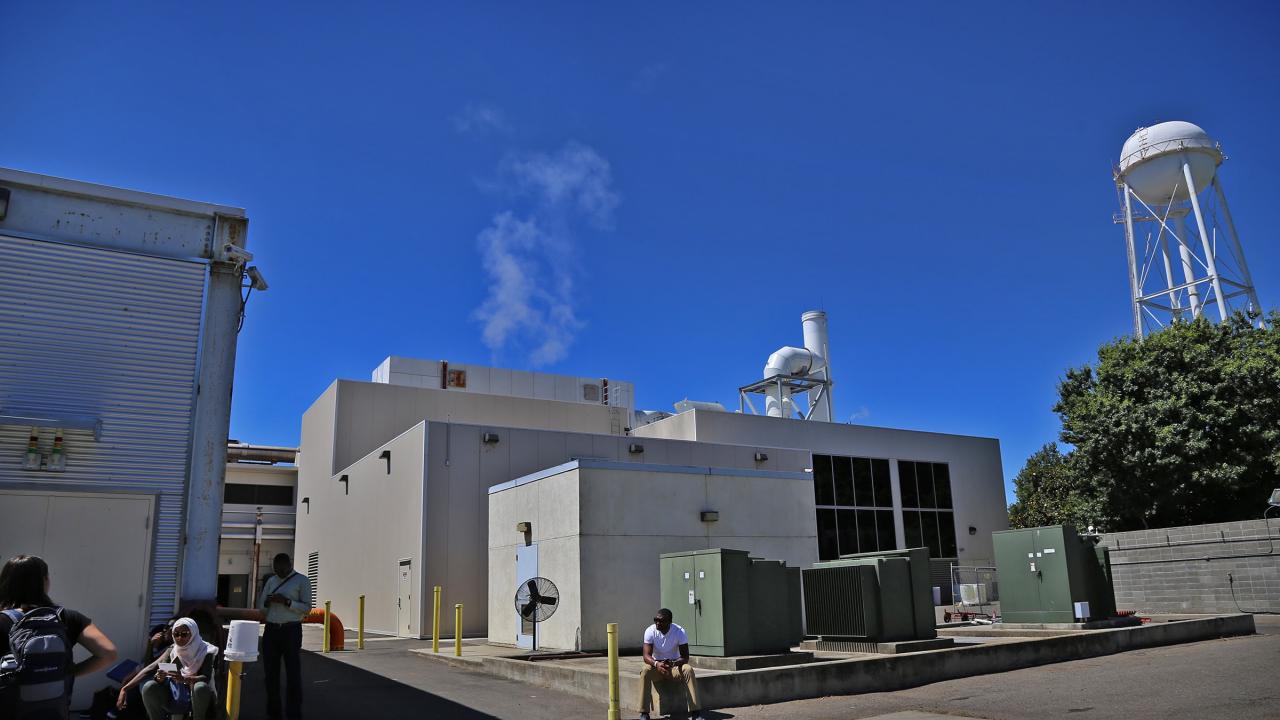 Located near the Tercero housing residence halls, UC Davis’ Central Heating & Cooling Plant (CHCP) heats and cools over 8 million square feet of building space. The CHCP is a hub for energy -- it’s where electricity and natural gas are used to make chilled water and steam to be distributed across campus.

Heating a Building - The Journey of a Water Droplet

UC Davis currently uses steam to heat buildings, which is transported from the CHCP across campus through a system of underground pipes. The steam then enters heat exchangers inside a building’s mechanical room where it’s either routed towards the water system or heating system. In the heating system, an air handling unit (AHU) pushes air past coils containing the steam, which transfers heat from the steam to the water, warming the building. In the process, the steam loses so much energy it turns back into water, which is piped back to the CHCP.

After being piped back to the CHCP, condensate collects in a deaerator tank. A dearerator removes dissolved gases (particularly oxygen and carbon dioxide) from the condensate in order to prevent the corrosion and damage of the boiler, which the condensate will later enter. A certain amount of water has to be in the tank at all times, so sometimes makeup water is added. To prevent rusting of the boiler tubes, engineers inject low pressure steam in the tank to remove any oxygen that might be absorbed in the water. The condensate can reach temperatures of over 200 degrees Fahrenheit!

From Condensate to Steam

Water from the deaerator tank is then pumped by feedwater pumps into the boilers. Boilers convert water into steam and can produce up to 150,000 pounds of steam per hour when heating demand is high. A natural gas-fueled flame (that can be up to 30 feet long and at around 3600 degrees Fahrenheit!) heats water in the tubes of the boiler to their boiling point. The steam that escapes is captured in a drum at the top of the machine. It’s similar to a water heater, but it’s boiling the water instead of just heating it.

The emissions are well below current pollutant regulations; as Energy Manager, Josh Morejohn, puts it: “This is about as clean a boiler you can get!"

The byproducts from the natural gas flame are captured in an exhaust train, which has a catalytic converter and ammonia injection to reduce nitrous oxide emissions.

The journey of a water droplet in the CHCP is not over yet! Attached to the exhaust stack on the roof of the CHCP is a condensing economizer, which extracts as much heat as possible from the exhaust, to be rerouted to the Tercero residence halls. Twelve buildings and one dining hall are heated by CHCP boiler exhaust, making the boiler plant even more efficient!

After entering buildings via the mechanical rooms, the heat is finally distributed throughout buildings such as the Tercero Residence Halls! From there, the cycle starts all over again, and steam (which turns back into water in the building heating process) is rerouted back to the CHCP to be collected as condensate.

Although the steam system has its benefits, in order to meet carbon neutral goals by 2025, UC Davis is currently in the process of switching from a steam heating system to a hot water heating system. This project is called The Big Shift, and has been ongoing since Spring 2020 with plans to be finished within the next 2 years. Ultimately, this large-scale construction process will reduce our usage of fossil fuels, and help save both energy and water for the long-term!

You may have noticed steam rising from the ground on cold days - this is energy waste from poor insulation or leaks in our piping system! This inefficiency is one reason we’re switching to a hot water system.