The 411 on the UC Davis District Energy System 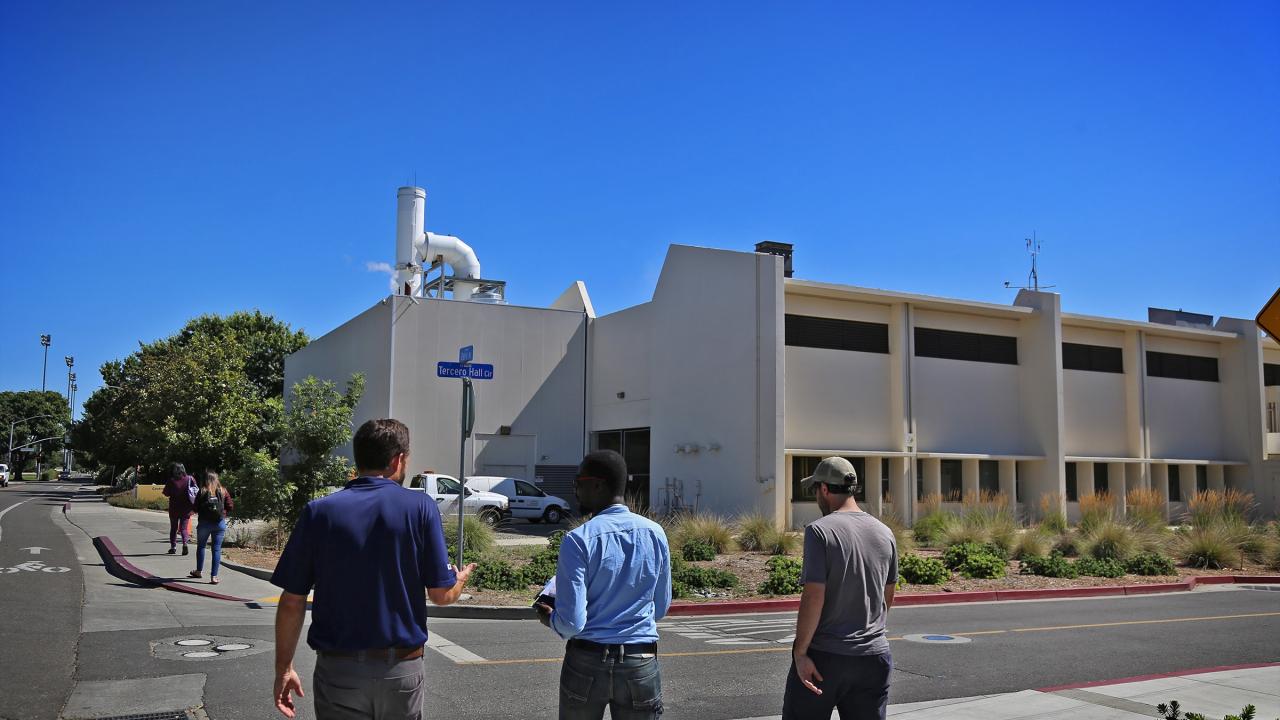 UC Davis has always been proactive when it comes to energy efficiency with projects such as the Solar Farm, building upgrades, and holiday building shutdowns. In 2013, University of California announced a Carbon Neutrality Initiative with all UC campuses working towards carbon neutrality by 2025. UC Davis has been planning its pathway by converting our steam district heating to hot water to reach this goal. One key step is to eliminate our dependency on natural gas. In order to understand how hot water heating would be beneficial, I attended a tour of the Central Heating and Cooling Plant led by Energy Manager Joshua Morejohn.  He explained how this giant energy hub is responsible for the campus heating and cooling, and what steps are planned towards meeting our Carbon Neutrality Initiative goals.

What is the Central Heating and Cooling Plant?

Every year, UC Davis spends about $20-25 million dollars in its energy bills to keep the lights on and buildings warm. Much of that cost goes into powering the Central Heating and Cooling Plant (CHCP). This energy plant is responsible for heating and cooling nearly 8 million square feet of building space! There are about 30 miles of piping that are used for steam and chilled water transport underneath the main campus.

The extensive system of pipes underground that connect the CHCP to each building on district energy consists of supply and return pipes. The supply pipes carry the chilled water at about 40°F and high-pressure steam at about 135 psi, both produced by the CHCP, out to campus buildings to heat and cool spaces. Once the steam and chilled water reach the buildings they are used for temperature regulation and come back to the CHCP through the return pipes. Chilled water that goes out to campus to cool buildings can return to the CHCP ranging between 5-30°F warmer, depending on how hot it is outside and how much heat that they have been able to extract from each building. Circulating the chilled water is one way that allows the campus to conserve more energy and reduce waste.

Currently, the CHCP has four boilers that rely on natural gas in order to produce steam for heating. Steam production results in 32% of the campus's carbon footprint. Steam was used for heating systems in the past because of its ability to carry a lot of energy in a small volume, which means smaller pipes than a hot water system. But it also means higher temperatures (350° F) and that plus aging piping systems (many well over 50 years old) means very high energy losses in the distribution system. One major step forward in our push for carbon neutrality by 2025 will be a project to convert our district heating system from steam to hot water.

“The goal is achievable, but it may not happen the way people expect it to,” said  Alan Meier, a senior scientist at the Lawrence Berkeley National Laboratory and adjunct professor at UC Davis, referring to the long road ahead in phasing campuses from reliance on natural gas to 100% carbon neutrality.

A major advantage of a hot water based district heating system is that it would allow for heat recovery from the chilled water system. The use of heat recovery chillers could allow UC Davis to move away from natural gas usage completely in their heating system which would be a major step in becoming carbon neutral. Installing a heat recovery chiller along with a hot water district energy system, heat could be removed from the warmer chilled water return and reused to generate hot water. This process would reduce the need for natural gas to produce steam.

Of course, this method may not be sufficient all year round as buildings would not need to be cooled as much during the colder seasons, which would result in less heat availability in warmer chilled water return. One way to supplement heating is to utilize ground source heat (geoexchange).  Geoexchange is a process that circulates chilled water into the ground in order to absorb heat and raise chilled water temperature naturally. This supplemental heat source for the hot water system would eventually eliminate the need for boilers completely.

Currently in the Works

One of UC Davis’s residence halls, Tercero 3, is an excellent example of why the proposed hot water plan would be a strategic decision for campus heating. In the process of creating steam, the boilers expel waste heat in the form of high-temperature, non-harmful air exhaust into the atmosphere. The cloud that looms above the CHCP is hot air condensing when it meets the cooler outside air. To get the most out of the heat and energy from the Central Plant, an additional condensing economizer was installed in the CHCP to further extract heat from the exhaust and use it to heat buildings. The newer parts of Tercero -  Tercero 3 and 4, along with the dining commons, are designed to use the economizer and hot water heating system. This allows for more efficient heating in the Tercero buildings. If the campus were to switch over to hot water heating only, it could be just as efficient as Tercero, but also use a carbon-free heating source rather than the steam boilers.

Why is this important?

The Energy Conservation Office is working on energy projects both big and small around the campus to ensure UC Davis lives up to its title of being the first in the world for sustainability. By taking steps towards meeting the UC Carbon Neutrality Initiative, UC Davis can prove itself to be capable of being carbon neutral on a large scale.

“We’re on our way to becoming the very first university system to wipe out our carbon footprint for good,” said UC President Janet Napolitano. “It’s a daring goal, and one that will take both individual and collective action to make happen. Part of that is building awareness about easy steps each of us can take to reduce our carbon footprint.”

How you can get involved

The graph above shows our energy usage trend compared to the student population here at UC Davis. As the student population size increased, the energy usage per student has steadily decreased over the years. This is due to improvements at the central heating and cooling plant, improved building efficiency standards, and energy conservation efforts by many on campus. You can participate and contribute by staying up-to-date on energy projects and spreading awareness.

Focused on Fitting the Job to the Worker